Raate Road was the scene of two decisive Winter War battles. The mission of the Soviet troops attacking Suomussalmi was to cut Finland in half at its narrowest point and to sever Finland’s land links to Sweden. Finnish soldiers achieved a major defensive victory in the battles of Suomussalmi and Raate Road and earlier in the village and further north in the Juntusranta direction and captured an enormous amount of various war spoils. Foreign war correspondents circulated photos and information about the battles, which were described as icy hell, around the world.

The monuments along Raate Road pay tribute to the memory of the destroyed Ukrainian 44th Division and deceased Finnish war heroes and fighters. According to various estimates, around 5,000 unrecovered Soviet bodies lie buried along Raate Road and in the surrounding wilderness, reminding us of the terrors of war and also of the relentless will of a small nation to defend itself. Raate Road is about 18 kilometres long and ends at frontier barriers. 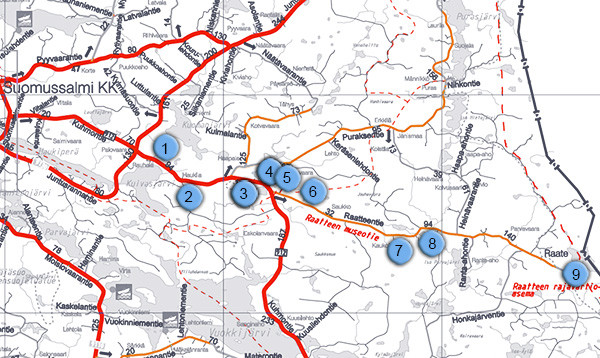