Winter War (30 November 1939 – 13 March 1940) Decisive battles in Suomussalmi were fought between 30 November 1939 and 10 January 1940. This was followed by a few minor skirmishes, the most important of which was the attack mounted by the Soviets on Raate on 21-23 February 1940, on the anniversary of the founding of the Red Army. The war zone covered almost the entire eastern part of Suomussalmi, including in particular Juntusranta, Kiannanniemi village and Raate.

When war broke out, Special Battalion 15 was formed at Suomussalmi Training Centre and had to bear the brunt of the attack by the Soviet 163rd Division consisting of around 17,000 men. In Lehtovaara at Juntusranta in the northern part of the municipality, the Soviet 81st and 662nd Infantry Regiments attacked while the 759th Infantry Regiment was doing the same in Raate. The Soviet division’s first objective was to take the village of Suomussalmi, after which the plan was to continue towards Oulu and sever Finland at her narrowest point.

Course of Winter War battles – delaying the advance towards Suomussalmi

When Soviet troops began their attack on the morning of 30 November, there was only a couple of squads guarding Raate. After a brief skirmish, the platoon withdrew to the delaying position at Myllypuro, where there was a couple of platoons of riflemen. As the Soviets continued their attack and began to encircle the delaying positions, the Finns withdrew at about 3pm through the Purasjoki Line to the Likoharju building to rest. Finnish losses in these skirmishes were limited to a few wounded. The Purasjoki Line was manned by troops arriving from the village and included four rifle platoons reinforced by eight machine guns and a mortar detachment. One platoon was held in reserve.

At Jänismaa in the Puras direction, there was one rifle platoon, two engineer squads, half of a machine gun platoon, the battalion’s gas defence unit and four border guards. There were two platoons and an engineer squad in the Kuhmon tie road direction. The engineers blew up Kattilakoski bridge in the evening.

Successful defence battles took place in the vicinity of the road between 1-3 December, but there was a growing threat from the Puras direction and it became necessary to transfer extra troops there. On 3 December, Soviet troops attacked the defence line supported by artillery and mortar fire.

In the early hours of the afternoon, the aggressors succeeded in circling behind the defence position from the north, but the move was successfully countered. Due to their precarious situation, however, the Finns had to abandon their positions on the Purasjoki Line between 3-4 December. More troops, including the Field Reinforcement Brigade’s IV Battalion had arrived in Suomussalmi on 3 December.

The next line of defence was established in the countryside in Mattila, some 10 km west of the Purasjoki river. A much larger concentration of troops could be undertaken in in this narrow strip of land than at the Purasjoki river. The Finns now had enough troops to be able to commence a counterattack on 5 December. However, the attack had to be discontinued at sundown and the troops returned to the Mattila Line by 6 December. 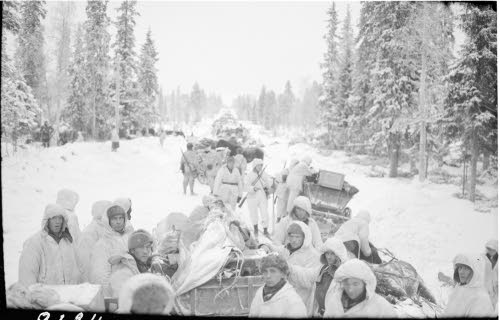 Once the battles to the north of Suomussalmi village had swung in the Finns’ favour, Lieutenant General Siilasvuo transferred all the forces that could be spared to Raate Road, which was occupied by the Soviets from Kuomasjoki river to Likoharju. Most of the Soviet troops were in the Haukila area.

Siilasvuo’s plan was again simple and clear: to cut off the Soviet supply line to the border, split up the troops into smaller segments, isolate them and wipe them out. To carry out this plan, a road was opened over the frozen lakes in the Alanteenjärvi-Vuokkijärvi area to assemble the troops and provide them with food and shelter.

Siilasvuo’s troops began to attack at the beginning of 1940. The main thrust of the attack was on Haukila and came from the north and south. The Finns successfully cut off Raate Road on the eastern side of Haukila. At the same time, the Soviet troops at Sanginlampi and Eskola towards Kuhmon tie road on the southeastern side of Haukila were wiped out. Those Soviet troops that had remained immobile in the areas of Haukila, Karila, Tyynelä and Mattila found themselves being surrounded.

The decisive battles for Raate began on 5 January 1940, when the Finns attacked Raate Road near the border in company strength. At Likoharju to the west, they attacked with about a battalion of men and took it after several attempts.

The Finns blew up the Purasjoki river bridge the following day while Siilasvuo’s troops also attacked the isthmus between Kokkojärvi and Teerinen. All these battles hastened the conclusion of the struggle, which ended at Haukila when the Finns attacked and wiped out the remaining Soviet troops.

Three regiments of the 44th Division were squeezed into a very narrow area. Since the road to the east was cut off, the Soviets were practically trapped. The Finns’ only weak point was towards Puras, but this too was reinforced. Between 5-7 January 1940, the Finns wiped out the encircled enemy units in Haukila and towards the whole of Raate.
All that remained was to rid the area of any remaining Soviet presence and on 10 January 1940, the battles at Suomussalmi had ended. The Soviet attempt to break through to the west had failed.

After this, there were only patrols and a few minor skirmishes, the largest of which was when three Soviet battalions attacked Raahe on 21-23 February 1940, on the anniversary of the founding of the Red Army. Most of Siilasvuo’s troops were transferred to the front at Kuhmo and to Ladoga in Karelia, where they ended up fighting in extremely bitter battles.
Peace descended at 11am on 13 March 1940 and the border at Suomussalmi remained intact. There were considerable losses on both sides: the Soviet divisions lost around 23,000 men and the Finns around 800.

Peace descended at 11am on 13 March 1940 and the border at Suomussalmi remained intact. There were considerable losses on both sides: the Soviet divisions lost around 23,000 men and the Finns around 800. 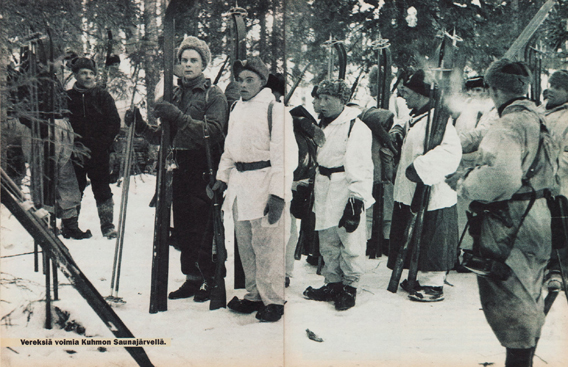 The buildings in the parish of Suomussalmi were burnt by the retreating Finns, with the worst destruction taking place in the areas the thick of the fighting – along Raate Road, as far as Piispajärvi on the road leading from Suomussalmi village to Kuusamo and at Juntusranta and the surrounding area. In addition, the villages of Ylä-vuokki, Ala-vuokki, Saarivaara, Kuivajärvi and Marjokylä were also burnt. A total of some 270 buildings were burnt in the municipality of Suomussalmi and it is impossible to measure the financial loss of the destruction.

The battles of Suomussalmi and Raate Road showed that technical superiority does not necessarily ensure victory in winter. The decisive factor was the infantry soldier and his accustomedness to forest warfare. The Soviet soldier fought to the very end because he had no choice. 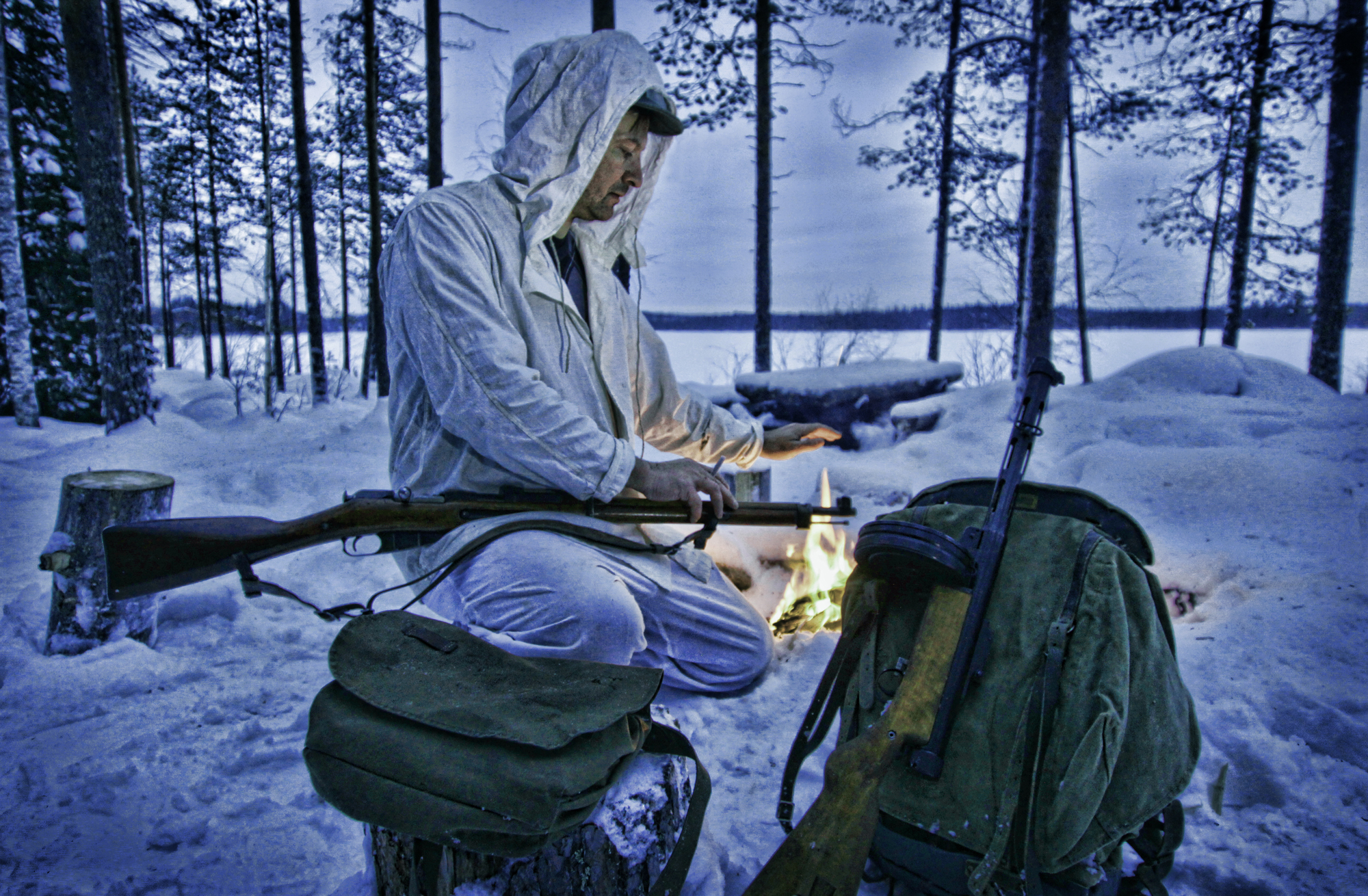